“Nice to meet you.” When I said that, Your eyes, growing big for a moment, Trembled as they looked me dead on.

That was still during our 14th spring. Through each of those days, until now, “I’ve been listening to your voice the whole time.”

What should I say? The wincing face of someone who feels lost… But you don’t have to say a thing; your gratitude was practically overflowing.

Today just feels so fun! Catching up on so many topics with a childhood friend, Who’s only ever been a ‘voice’.

Somehow, I felt my time… and mine alone, Had been drawing circles in the same place, Before coming to a halt.

Now it’s our 21st spring. You came to see me, Clutching a response to an old letter close to your heart.

I’m glad I was in a rock band. It wasn’t a mistake. I can believe that now.

Dreams I scribbled out with no addressee… true feelings I exposed with zero shame… You accepted them all — you kept them warm, never throwing them away. We came to know each other better than our closest friends… …without even know each other’s name.

According to you: “Every day, every night, Through rain, shine, wind, and snow… We talked, never growing tired.

At times we’d get fed up with one another, grow distant, And not hear from one another for a while… But in the end, we’d always come back.

Even if no one around us listened… Even if a popular song was playing… We always had this song of our own.” — So you say.

The state of a heart when re-approaching a difficult conversation… a long winded and clumsy confession… I kept scribbling them out — I scattered them out into the world! They easily succumbed to the wind, erased within seconds! But you accepted them — you remained there, never throwing them away… picking up my voice, despite it being so much smaller than the wind.

Dreams I scribbled out with no addressee… true feelings I exposed with zero shame… An unsightly, disgraceful sight I forced upon everyone… hopes I sent flying, just as they fell.

Continuing to scribble away, more than 10 years passed… then that girl appeared before my eyes. Carrying the response to my letter within her hands— her eyes— her heart… she appeared before me. 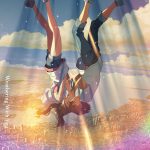 Is there still anything that love can do? (English Version) – RADWIMPS