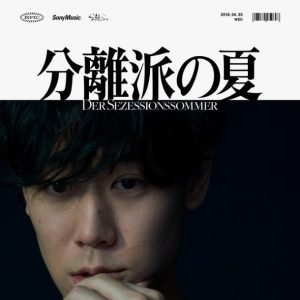 Secession ( \si-ˈse-shən\ ): 1) withdrawal into privacy or solitude, retirement; 2) formal withdrawal from an organization. With its painfully personal lyrics, a songwriting style evoking less Tokyo and more West Coast, and its creator’s self-professed distaste for the mainstream Jpop scene, Nariaki Obukuro’s debut solo album Bunriha no Natsu (“The Secessionist’s Summer”) feels equal parts open manifesto and private diary.
Immediately setting the album apart is its relative lack of Jpop’s standard songwriting and A/B/Chorus structure. Obukuro is a solo artist with no dedicated band, so his tracks are free to start with just a simple drum track or an idle guitar strum, leaving space for slow, natural crescendos that delay satisfaction rather than indulging immediate payoff. This also puts the spotlight firmly on Obukuro’s vocals, which are as versatile as they are powerful, from the ballad style of “Selfish” to the hip-hop flow of “Kadode”. Early track “Daydreaming in Guam” exemplifies his approach, starting low and quiet as Obukuro remembers languid summer nights spent on a smoky veranda, only moving to smashing guitar distortion once the singer has returned to the present, realizing he has no choice but to wait for his loneliness to end.

“Until I can see you again

I have to keep piling kindling on the fire"

This lyrical focus on loneliness is the album’s strongest undercurrent (after all, to intentionally separate yourself from a group is a solitary endeavor), and each song is further weighted with fragments of lived-in memory. Whether it’s the moonlight mixing with stagelamps at Fuji Rock in Naeba (“Natsu no Yume”) or green tequila on the rainy spring streets of Shibuya (“E. Primavesi”), each image is specific enough to make the tracks read as personal anecdotes rather than generalized, radio-ready metaphor. This level of personalization makes the lyrics hit especially hard—when Obukuro concludes his stream of consciousness in “Summer Reminds Me” in tears of frustration, the words “I just want to rely on someone, anyone” feel painfully from the heart.

“I don’t wanna be the lonely one

I held my breath

But they call me the lonely one”

Yet, despite these themes of isolation, Obukuro does have at least a few like-minded artists to rely on. Frequent collaborator and elusive pop legend Utada Hikaru (first for a track on her comeback album Fantôme and more recently in tribute to a Sheena Ringo classic), is the most prominent. Formally, Utada is Bunriha no Natsu’s producer, but since her name automatically attaches her media reputation to the work, she's also its biggest promoter. Thankfully, Utada’s involvement is restrained enough that the album never feels overwhelmed by her presence—this remains very much Obukuro’s work—though this doesn’t stop the pair from turning in a few excellent duets. “Lonely One”, which debuted earlier in the year, plays Obukuro’s artsy minimalism against Utada’s more mainstream pop verse to great effect. More subtle, and all the more powerful for it, is the pair’s collaboration on subsequent “Saikai”. Here, Obukuro hints at reunion, his lyrics likening his partner to a musical instrument (telling, perhaps). Rather than taking the spotlight, Utada skulks, ghostlike, from one side of the mix to the other, providing backup and creating an increasingly dissonant mood that shades even this brief moment of happiness with foreboding.
The album’s few weak points come when it strays too close to the conventional. “Game”, the album’s first song, provides an excellent showcase for Oburuko’s minimalism and falsetto, but hews much too close to standard RnB beat, and its central “love is a game” metaphor is jarringly cookie-cutter compared to the lyricism found elsewhere on the album. The two field recordings, “042616 @London” and “101117 @ El Camino de Santiago”, where colleagues expound on Obukuro and the nature of art (“London”) or modern society (“El Camino”), also feel unnecessary—though they indeed reinforce the album’s themes (especially in relation to modern society), they don’t add much that isn’t presented more subtly in the album’s musical tracks. However, these minor points detract only slightly from Bunriha no Natsu’s artistic presentation of loneliness, memory, and summer. Nariaki Obukuro’s first work is a true breath of fresh air: emotionally moving, fiercely uncompromising, and a great listen to boot.
Stray Impressions:

友達になろう!
Latest posts by Toria (see all)
☆Let us know what YOU think in the comments!☆
For more song translations, check out their lyric directory here: 小袋成彬 (Nariaki Obukuro)
【 SEARCH LN 】

View More
Come chat with us!