Home » Reviews » GOOD ON THE REEL - Guanaco no Ashi Review

Album Review:
GOOD ON THE REEL's Guanaco no Ashi is a captivating journey 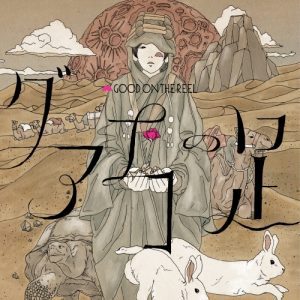 “If you look back for just a few seconds, somehow, looks like we’ve come quite a ways” begins Guanaco no Ashi, the third full-length album by pop-rock quintet GOOD ON THE REEL. Indeed, GOTR has generated a strong discography and honed their style—solid instrumentation backed by meticulously constructed lyrics—to a fine edge. Yet despite their strengths, there is a certain sense of sameness about the band's works, with nothing tying any of their songs to any particular disc. Guanaco no Ashi breaks this pattern for the first time in the band’s decade-long career, resulting in a compelling album that feels like a clear shift in GOOD ON THE REEL’s journey as musicians.
First off, the composition of the album is noticeably more lively than past fare. Vocalist Takahiro Chino and guitarist Ryota Imaruoka, the band’s primary songwriters, have commented that they intentionally strove for a more rhythm/tempo-driven sound to contrast previous album Petri ga Yonderu, and it shows. Tomohiro Usami’s bass and Makoto Takahashi’s drums are given much greater prominence throughout Guanaco; the drums shine especially in standout track “Hirari”, where they come crashing down in a rolling coda at the moment the singer realizes that his former love is in fact gone. Hand claps punctuate several songs, further giving the sense that GOTR is entreating listeners to join in; in heartwarming, hopeful lead single “Chiisana Heya”, they seem particularly designed as a hook for audience interaction at live shows.

“Before we’d realized it, see? Flowers have begun to bloom along this path

In this desert where we’re not alone”

However, the true standout difference of the album is in its thematic cohesion as a unified work, rather than as twelve unrelated tracks. The title, “Guanaco no Ashi,” refers to the pata de guanaco flower, found in the Atacama Desert (the world’s driest), where it occasionally blooms in brilliant defiance of its harsh environment. This theme, of beauty noticed while journeying through a desert, forms the album’s core thread. Although this is spelled out most literally in aforementioned album opener “Sabaku” (appropriately, “Desert”), other tracks connect by considering “The Desert" as a metaphor for desolation more broadly. Songs also cluster into thematically related groups, giving the album even greater cohesion: adjacent tracks “zzz” and “Fuyu no Hitsuji” both refer to sheep; adjacent tracks “Tomoshibi” and “Ginga Tetsudo no Asa” are connected by their focus on the Atacama's famous starlight. The middle act is the most developed of these clusters, reading as a narrative on the aftermath of a relationship: from anger and sadness (“Aitsu”), to sedate reminiscence (“Nigemizu”), finally arriving at acceptance (“Inakunaru Hi”). Chino infuses his delivery throughout with his trademark emotive, desperate style; the final words of “Inakunaru Hi”, uttered from a train platform to “please, be well”, are heartbreaking.
Although these trends are visible throughout the album, they come to a head in Guanaco no Ashi’s finale, “Ginga Tetsudo no Asa” (“Morning on the Galactic Railroad”). The song uses the characters of Kenji Miyazawa's unfinished novel Night on the Galactic Railroad as a framework to look ahead, wondering what comes next after the final chapter of a story. This focus on the journey to come forms the perfect counterpart to the album’s opening, which looked back on the journey already traveled; the parallel relationship is underscored by bringing back several instrumental cues from the opening tracks, such as the plinking piano from “Sabaku” and Kouhei Okazaki’s guitar riff from “Chiisana Heya”. The tightly structured lyrics evolve incrementally with each chorus, before arriving at the album’s satisfying conclusion: that one must keep journeying forward, for the sake of one’s own future.

...for the sake of our future"

To be fair, the album is weighed down slightly by a few tepid numbers near the end, namely “Fuyu no Hitsuji” and “Nigemizu” (which, despite meaning “desert mirage”, feels mostly like a last-minute carryover from Petri ga Yonderu, what with its slow pace and rainy season imagery). Furthermore, many of Guanaco’s songs take a little time to grow on the listener, or shine better when the tracks are listened through in order. The result is an album where no one song by itself is quite as immediately catchy on first listen as something from say, first album Toumei na Kasa no Uchigawa Yori. But make no mistake, Guanaco no Ashi is by far GOTR’s most cohesive and deliberate work, and gives the sense that the band has starting moving in a new direction, past the songwriting formulas that have brought them them this far. Fans should continue to watch GOOD ON THE REEL closely, seeing where this journey next takes them.
Overall Impressions:

友達になろう!
Latest posts by Toria (see all)
☆Let us know what YOU think in the comments!☆
For more song translations, check out their lyric directory here: GOOD ON THE REEL
【 SEARCH LN 】

View More
Come chat with us!

Album Review: "グアナコの足 (Guanaco no Ashi) - GOOD ON THE REEL"