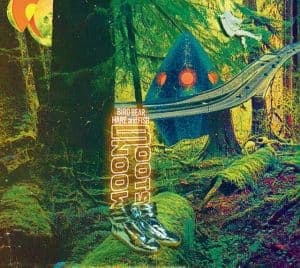 In many ways, Galileo Galilei’s Sea and the Darkness felt like the closing of a chapter, summarizing the band’s years of growth—high school contest winners from Hokkaido turned Budokan headliners—into a cohesive and moving whole. But it still came as a surprise to hear, not soon after the album’s release, that GG would be disbanding: Though it was great to see the trio go out on a career high, what might they have done next? While nobody expected the members to exit the music industry altogether, few probably thought the exact same individuals (plus their touring guitarist) would reform just a year later as a new group, BBHF.
Given the identical lineup, it’d be easy to assume that the group’s debut album, Moon Boots, might end up sounding just like another GG record. Indeed, shadows of the band’s previous work linger around the edges of the album. Anime tie-in “Laika” is cut from the same cloth as Sea and the Darkness’s “Climber”, seen in both songs’ brisk pace and high-energy outro verses. Similarly, “Different” feels like a sequel to ALARMS’s “Pilot Girl” as it reaches for that feeling of longing after someone who far surpasses you, high in the sky (not to mention both songs’ use of shouts). As the final song written in the band’s Galileo era, “Hone no Ne” is the most literal GG callback, though its more sedate tone and pleasantly gloomy lyrics are closer to lead singer Yuuki Ozaki’s solo project, warbear.
But this is where the similarities end, as was apparent from the band’s debut track, “Page”. The song eschews the clear, lyrics-first arrangement seen in most J-Rock in favor of a murkier sound and more instrumental focus—indeed, in a rare move for a debut single, the chorus has no vocals other than Yuuki’s wordless but always-welcome falsetto—that feels closer to something you’d expect to come out of the UK. Turns out, it was a good indicator for the album to come; where Galileo Galilei started with a more typically Japanese sound, later incorporating elements of electronica and folk, BBHF’s Moon Boots instead draws heavily on multiple American and British rock styles.

“The band gets off the bus

They won’t do your favorite song… no, they won’t.”

Though the band has always had one eye to the west, they take it further here than in any of their previous work, likely influenced in part by frequent collaborator Chris Chu (of American band POP ETC), who produced the album. Powered by Hitoshi Sakou’s heavy basslines and DAIKI’s distorted guitar, tracks like album opener “Ukraine” and “Dashboard” lean full into classic rock—the latter’s bridge, when the “take off and go” imagery hits top speed, is an album highlight. Other tracks bring the tempo down, such as “Replicant”, which layers synthesizers and digital effects that perfectly capture the Blade Runner allusion of the song’s title (the android angle also adds fantastic ambiguity to the lyric “my computer’s acting up”).

“I was waiting for a boat to come for me, one that would never arrive

The integration with western genres is especially apparent in the album’s final one-two punch. The echoing choruses and “keeping the fire” imagery of "Tsugi no Hi” place it firmly in stadium anthem territory, with drummer Kazuki Ozaki’s alternating snares and heavy hits adding a marching-band cadence that underscores the song’s pledge to keep moving forward. The theme carries perfectly into “Work”, which, with its twangy guitar tone and classic imagery (medicine to take the pain away, references to one’s son and daughter, light at the end of the tunnel), feels like it could’ve come from the American South instead of Japan’s northernmost city. The heartbreaking lyrics expose a specifically grown-up emotion—weariness and desperation with one’s own professional/personal stagnation amid the daily grind—as well as the resolve to press on nevertheless. The song’s a fitting close to the album; both musically and lyrically, it feels like a work that BBHF’s four members simply couldn’t have produced in their previous incarnation.

“Our footsteps burst into flame, becoming a path worth treading

Moon Boots is very much the work of a band making sure that their new project can stand on its own merits; indeed, the album’s name refers to the moment when you take a giant step forward from where you are now. BBHF don’t sound like high schoolers from the countryside anymore—their voices are deeper, their influences more global, and their lyrics more adult—and that’s fine, though it does mean that fans of Galileo Galilei, especially their more innocent and clean-sounding work, might not necessarily enjoy BBHF. Yet, the group’s core strengths remain, along with enough ties to their previous work to ease the transition, and it's clear that after their brief hiatus, the four have creatively reset and are now ready to step out in a new, more mature direction.
The band’s back together.
Stray Impressions:

友達になろう!
Latest posts by Toria (see all)
☆Let us know what YOU think in the comments!☆
For more song translations, check out their lyric directory here: BBHF
【 SEARCH LN 】
Come chat with us! 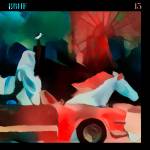